Sold millions of times around the world: Reciprocating compressors and condensing units made in Germany 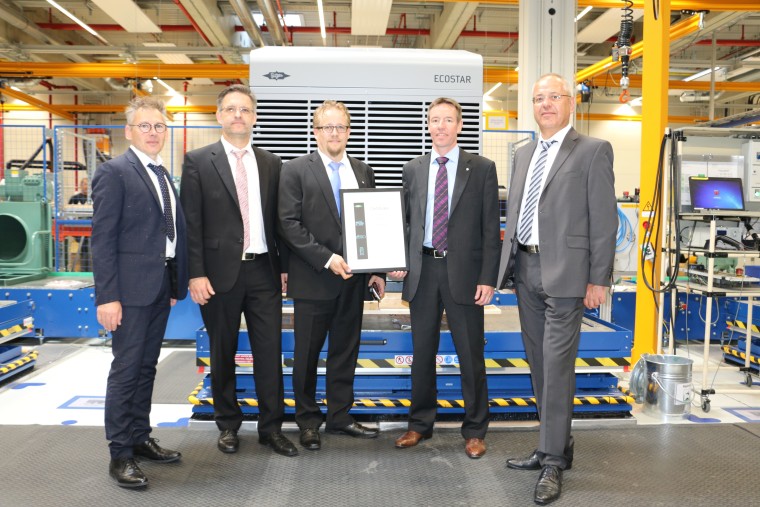 Klaus Nyström (Managing Director, 2nd from right) and Markus Antikainen (Product Manager, centre) travelled to Schkeuditz to accept the ECOSTAR condensing unit from the new LHVE series as well as the corresponding certificate

2.5 million compressors and condensing units and a quarter of a century on a course of constant economic growth, that is the successful result which the BITZER Group has achieved from 25 years at Schkeuditz. Frank Fuhlbrück (Factory Manager at BITZER Schkeuditz), Erik Bucher (Director Sales Refrigeration) and Ralf Gasper (Director Sales Northern Europe and Baltic States) from BITZER handed over the anniversary product to its Finnish customer of many years, Oy Combi Cool Ab. For this event, Klaus Nyström (Managing Director) and Markus Antikainen (Product Manager) travelled from Helsinki to Schkeuditz, to accept the ECOSTAR condensing unit from the new LHVE series together with the corresponding certificate. “We are very happy that we have got this anniversary condensing unit,” said Markus Antikainen from Oy Combi Cool Ab. “We see it as a sign of our mutual respect. We have placed our trust in quality from BITZER since 1989, so we have successfully worked together for quite a long time. We are very pleased that we got the chance to once again visit the manufacturing location at Schkeuditz for this happy event.”

Today, Schkeuditz is the international competence centre for BITZER reciprocating compressors and it can look back over a historic past. BITZER recognised the potential of the location immediately after the Fall of the Wall and founded BITZER Kühlmaschinenbau Schkeuditz GmbH in 1991. “This factory is an important part of the BITZER Group,” said Fuhlbrück. “This site is logistically extremely well placed, with a good connection to Leipzig airport. There was a good opportunity at the time to take over parts of the MAB factory (Maschinen- und Apparatebau Schkeuditz VEB) and to thus be able to integrate the team’s technical know-how into our own production. When it was founded, the factory employed 210 staff, of which 180 came from MAB. After all, experience is priceless and there was plenty of that in Schkeuditz. Compressors had been produced here since the end of the 1940s. Those were ideal conditions for the courageous decision that Senator h. c. Peter Schaufler took then.”

Since 1991 BITZER has extended the Schkeuditz site, has increased the production volume seven fold and has increased the number of staff employed to about 750. The size of the production area has also been significantly scaled up from about 2,500 m2 to more than 19,000 m2. Overall, since the takeover in 1991, BITZER has invested more than 100 million euros in the site and is still continuing to extend it. Today BITZER is one of the largest employers in the borough of Nordsachsen.

“Since the foundation of the site in 1991, BITZER has made quite an impact in the region around Schkeuditz and has modern production systems,” said the factory manager Frank Fuhlbrück. “We set international standards in the development and production of reciprocating compressors and condensing units and we place great importance on quality. Our focus is always on meeting the high quality standards both of BITZER and of our customers. Made by BITZER also means quality made in Germany.” To guarantee that, BITZER introduced the BIPROS production system years ago. This means that a zero error principle can be maintained over the entire value chain. “We always have an eye on the customers’ requirements during this. They are what we arrange our entire production process around,” said Fuhlbrück. “It is due to the perfectly harmonised teamwork, the just in time procedures, the standardisation as well as all of the well attuned and continuously improved processes that we can increase the performance, efficiency and cost-effectiveness of our production and with that, of our products too. As precise as a Swiss watch, that is how our production in Schkeuditz works, and that is just how our compressors and condensing units work.”

Investing in the future

“To be able to ensure BITZER quality in the future too, we are very committed to the professional training of our technicians,” emphasised Fuhlbrück. “In the future too, Schkeuditz will be one of our most important sites, which is why we are investing.” Since the end of 2015 when the extension work on the Schkeuditzer training workshop was completed, up to 40 apprentices can be trained at the same time. “We’re more than satisfied with the past 25 years and we are optimistic about the future. In future the Schkeuditz site will continue to play a very important role within the BITZER Group.”