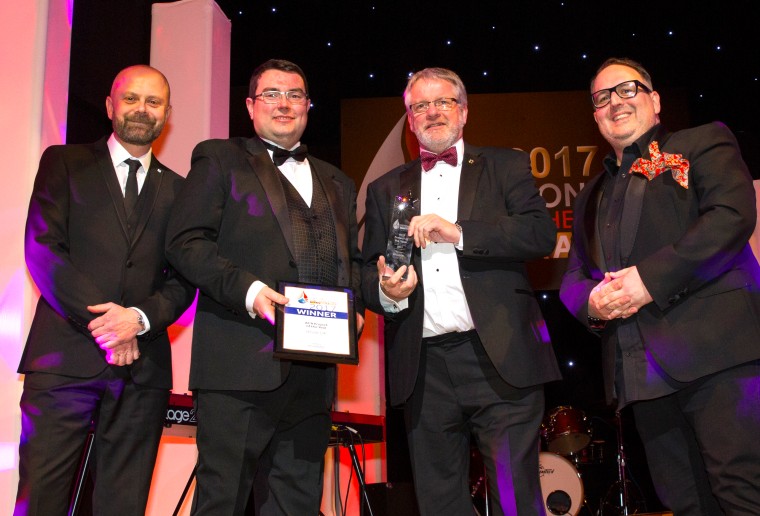 Milton Keynes/Sindelfingen, 16.03.2017. At the end of January, compressor specialist’s BITZER British subsidiary BITZER UK and the company G&O Refrigeration were honoured with this year’s National ACR and Heat Pump Award in the category ”ACR Project of the Year“. They won the award for a series of ice rink projects that have delivered dramatic energy savings for end users.

The companies were presented with the prestigious Refrigeration Project of the Year Award in the National ACR Awards, staged in front of an audience of several hundred leading industry lights at a gala event in Birmingham Town Hall. The judges described the projects as a first for the industry, and the choice of compressors as “a pioneering decision for contractor G&O Refrigeration”. It was the first time BITZER’s CSV semi-hermetic screw compressors with integrated frequency inverter had been used in ice rink applications.

Working with BITZER UK, G&O Refrigeration developed a new rink refrigeration plant called “Gorac chiller pack”. Based on BITZER CSV compact screw compressors with integrated frequency inverter, it is designed to deliver exceptionally reliable cooling and significantly reduced energy costs. This is a major aspect since the energy required to form and maintain an ice pad is one of the most important elements in rink running costs.

Reliability and efficiency are absolutely vital for ice rinks. This was the reason the company selected BITZER CSV compressors to form the heart of its new approach to compressor pack design for rinks. Kevin Glass, Managing Director of BITZER UK, praises the excellent collaborative relationship: “We worked closely with G&O Refrigeration throughout to ensure they had the support and technical back-up they needed. The initiative has been an unqualified success, and is based on a willingness to innovate and move beyond established ways of doing things.”

The CSV is a fairly recent addition to the BITZER range, and is a very efficient, robust and reliable compact screw compressor. The key to its efficiency is an integral inverter which precisely controls the speed of the motor in line with cooling demand. In addition to a built-in frequency inverter, the compressor has on-board protection and monitoring sensors, magnetic valves for regulation and liquid injection, all in one pre-wired package.

The compressors operate on R134a, which is normally associated with medium temperature applications, such as commercial air conditioning. However, the performance envelope is surprisingly wide, and the company was attracted by the fact they can evaporate down to -17 °C, at a suction pressure of 0,5 bar.

A pack replacement project at Milton Keynes rink carried out by G&O Refrigeration has more than halved cooling energy costs. The electricity bill with the previous system was £11.000 a month. Following replacement with the Gorac/BITZER system, costs have fallen to between £4.000-£5.000 a month. Subsequent projects have confirmed average savings of between 45-50 percent.

Following its success, G&O Refrigeration has now produced 10 Gorac packs for use in rinks across the UK. In addition to Milton Keynes, they have been installed at rinks in Hemel Hempstead, Swindon and Cardiff. This latter project is the largest to date, with two ice pads on site. The company is now attracting the attention of overseas ice rink operators, and is involved in supporting projects taking place in mainland Europe.

Milton Keynes/Sindelfingen, 16.03.2017. At the end of January, compressor specialist’s BITZER British subsidiary BITZER UK and the company G&O Refrigeration were honoured with this year’s National ACR and Heat Pump Award in the category ”ACR Project of the Year“. They won the award for a series of ice rink projects that have delivered dramatic energy savings for end users.