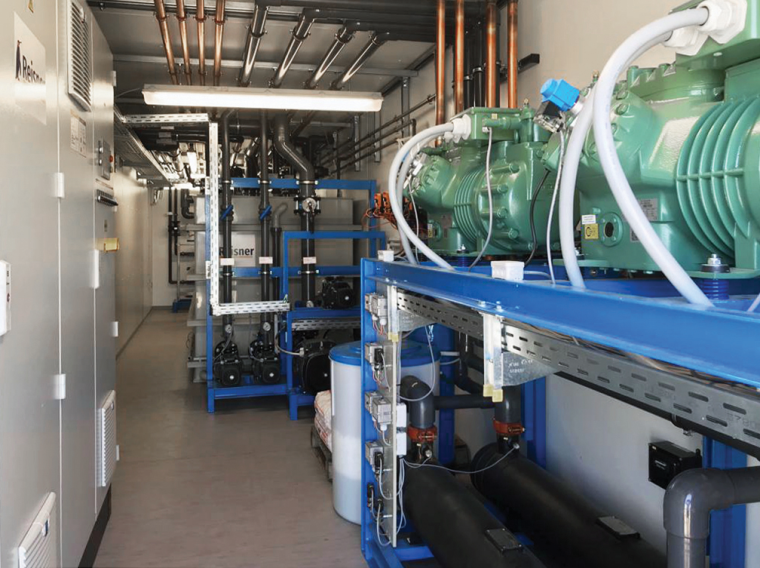 Reisner supplied the entire refrigeration system and its accessories in a twelve-metre container. In the foreground: two BITZER reciprocating compressors, each with 96 kW cooling capacity 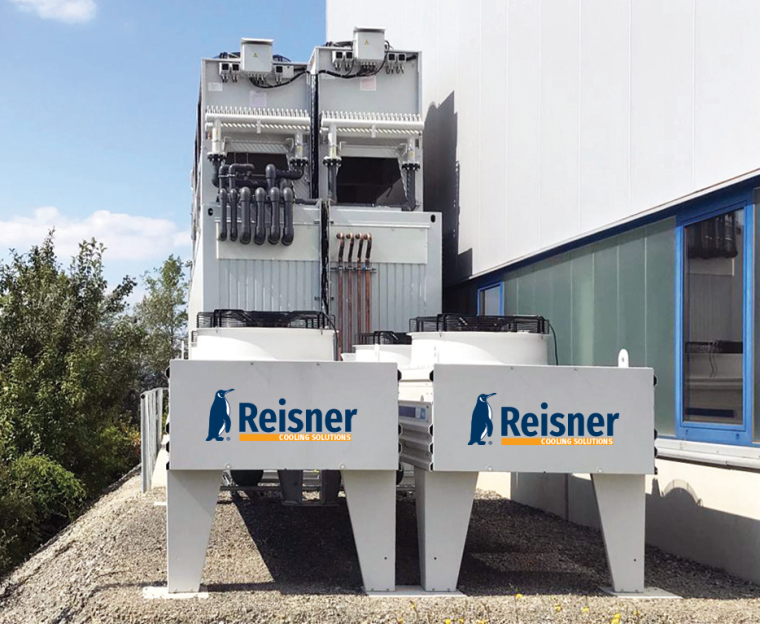 Elaborate plans, limited time: estimated delivery was only 14 weeks after receipt of the order 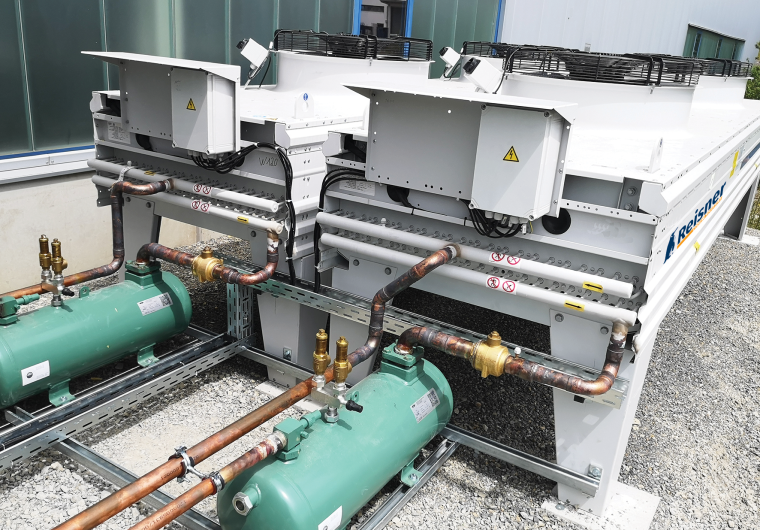 Thanks to EC fans, the condensers operate especially quietly 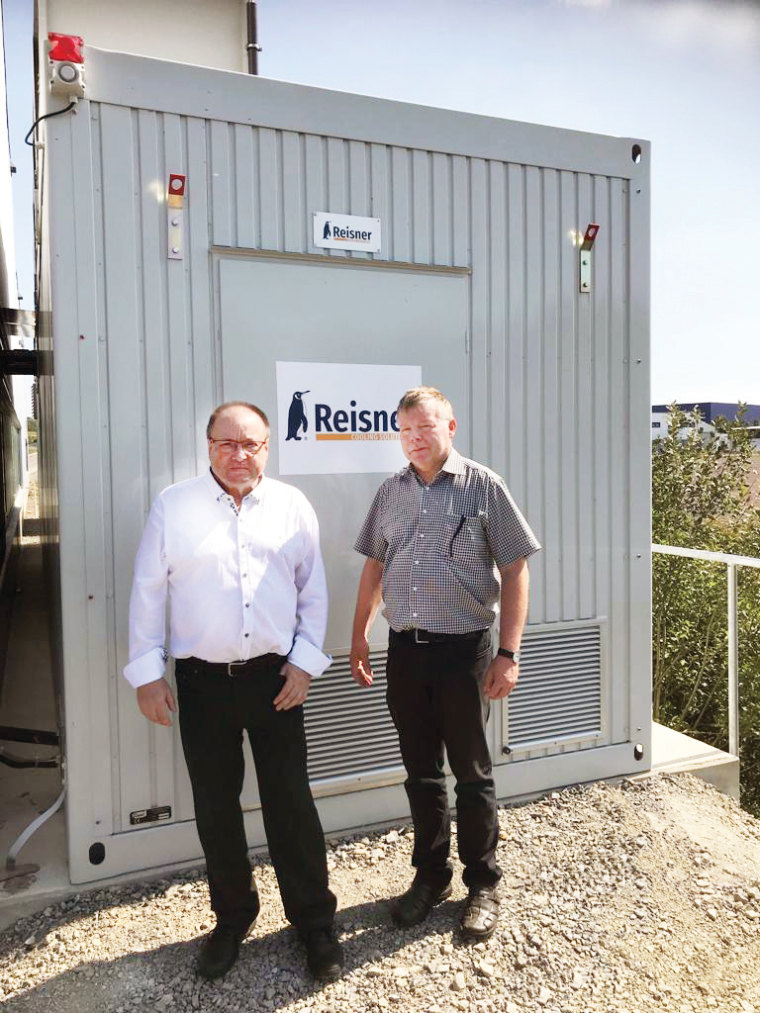 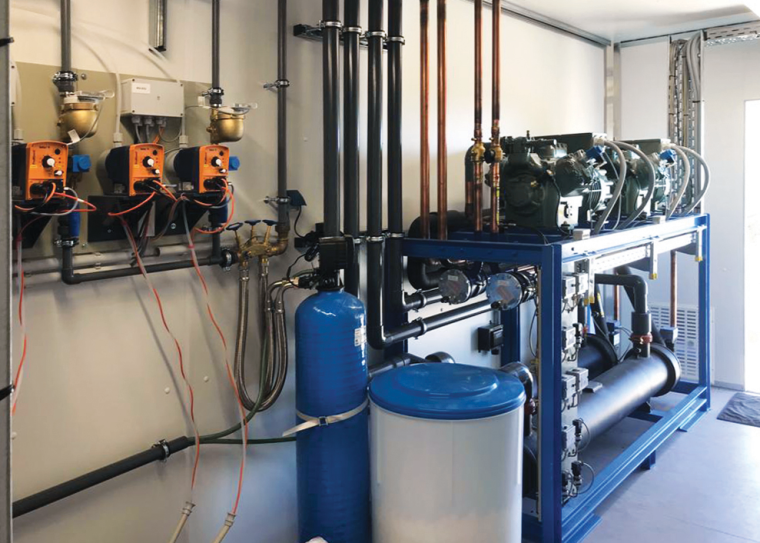 Sindelfingen, 13.08.2020. Production standstill – a dreaded worst-case scenario across all industries, plastics processing included. Security of production was therefore one of the most important aspects when WOCO Eisenacher Kunststofftechnik GmbH set up its new production site. Particular attention was given to the issue of refrigeration technology. This is why the company relies on a refrigeration system from Reisner Cooling Solutions GmbH, which still runs in a cost-effective fashion even while providing plenty of redundancy.

At the beginning of January 2019, it was time for something new at WOCO Eisenacher Kunststofftechnik GmbH: the plastics producer gradually began renting several production halls and equipped them with injection moulding machines. The company has since been producing a wide range of automotive parts at these locations, from wing covers to e-bike components. These new halls also posed new challenges in terms of refrigeration technology: the system had to be able to handle planned growth flexibly and its design had to ensure that the demanding level of production could be secured at all times.

Decades of trusting cooperation
Martin Stützer is the Commercial Director of the company and has been with WOCO since 2007. He knows every detail of production and refrigeration supply. “We have worked with Reisner systems before at our existing location and have supplemented and expanded these systems over the decades. Reisner also takes care of the refrigeration system on the service end and knows what we require. That made it clear who we would turn to for the upcoming planning process,” he reports. For the current stage of expansion, four injection moulding machines, each with a clamping force of 1,000 tonnes, are in operation at the new location. As soon as production is complete, eight large 1,000-tonne machines and several smaller 150 to 200-tonne machines will be put into operation. This stage of development will not conclude until 2022 at the earliest, however.

As such, Reisner has had to plan out refrigeration technology while striking a careful balance between future-proof performance and over-dimensioning. WOCO Eisenacher Kunststofftechnik GmbH and Reisner developed the concept jointly during the offer phase. Reisner adapted the design several times while providing detailed advice for each step. This proved enormously useful to Stützer and the team: “Reisner showed a great deal of understanding for our situation and contributed creative ideas. Our contact person, Sales Manager Günter Sareyko, showed us exactly what the consequences of each individual decision would be. This meant we were always well-informed and able to make sound decisions.”

BITZER compressors deliver top quality
Operational security has always been a top priority for WOCO; after all, maximum availability is required in the automotive industry. The risk of complete interruption had to be close to zero – should a component of the system nevertheless fail, at least 60 per cent of production should be able to continue. This requirement was a recurring theme throughout the entire concept. Reisner used a double system with two high-quality compressors, each with a cooling capacity of 96 kW: two capacity controlled BITZER ECOLINE 6FE-44Y reciprocating compressors operate as part of separate refrigerant circuits, each with its own BITZER DH1-193/STD shell and tube evaporator as well as condensers. A dry cooler serves for winter relief. The result of all this sophisticated technology: “The piping in the hall was very complex”, reports Stützer. “Our requirement was that the systems should be able to supply the majority of the production independently of each other. As such, we needed more pipes, more valves, and more butterfly valves than if we had used a simple solution”. Reisner planned everything to measure, delivering the entire refrigeration system and its accessories in a twelve-metre container.

Refrigerant R513A with lower GWP
The system should not only be fail-safe, however; it should also run in a cost-effective fashion. This led Reisner's experts to choose R513A as a refrigerant: thanks to its excellent thermodynamic properties, it ensures optimal operation of the refrigeration system while maintaining a low GWP (Global Warming Potential) of only 631. Should outside temperatures drop, the refrigerant circuit transfers more and more of its load to a self-draining dry cooler before finally taking over completely, saving compressor energy as a result. EC fans are installed on the condensers, with motors continuously adjusting their speed as required thanks to integrated control electronics. This means that they require less energy than conventional AC fans for the same air output and run much more quietly. The concept also keeps long-term operating costs extremely low on the hydraulic side. Reisner Managing Director Thomas Imenkämper: “Thanks to the hydraulics, we can work with a relatively high supply temperature at WOCO Eisenacher Kunststofftechnik GmbH. This means that we have this area completely covered in terms of free cooling. A dry cooler operates exclusively for the hydraulics, while the winter relief device from the tool cooling system provides additional support if required.” As a backup, Reisner has integrated a plate heat exchanger into the system flow. Additional water flows through it according to demand so that the extra cooling only uses water when it is really needed at that specific moment in time. Reisner then uses the heat from the return flow of the hydraulic cooling system for hall heating via a heat recovery system – which has a considerable effect on operating costs.

A refrigeration system with a full range of water treatment equipment
Given that clean cooling water is an important safety factor for the refrigeration system, Reisner has installed two separate water tanks in both the tool and hydraulic circuits. In each tank, a main flow return filter system with stainless steel baskets and filter inserts made of mesh fabric is installed. These remove solids without any pressure or backflow. In addition, dosing pumps treat the system regularly and precisely as required to protect it against corrosion, algae infestation and microbial growth. Despite all of the elaborate details in this system, Reisner had to keep to a tight schedule during project implementation – after all, the delivery time was only 14 weeks after receipt of the order. Martin Stützer: “Reisner adjusted to our specifications and we trusted that the implementation would go according to plan. Now we have put the plant into operation on time.” After commissioning took place, Reisner has gone back to performing regular maintenance. “In our production process, every day is totally different”, Martin Stützer continues. “New machines, first sample approvals, other developments – our refrigeration technology has to be able to keep up. The intensive support provided via the maintenance contract has the additional advantage that Reisner is always up to date regarding demand. This means that we can continue to expand the systems in future while relying on them completely.”

Sindelfingen, 13.08.2020. Production standstill – a dreaded worst-case scenario across all industries, plastics processing included. Security of production was therefore one of the most important aspects when WOCO Eisenacher Kunststofftechnik GmbH set up its new production site. Particular attention was given to the issue of refrigeration technology. This is why the company relies on a refrigeration system from Reisner Cooling Solutions GmbH, which still runs in a cost-effective fashion even while providing plenty of redundancy.