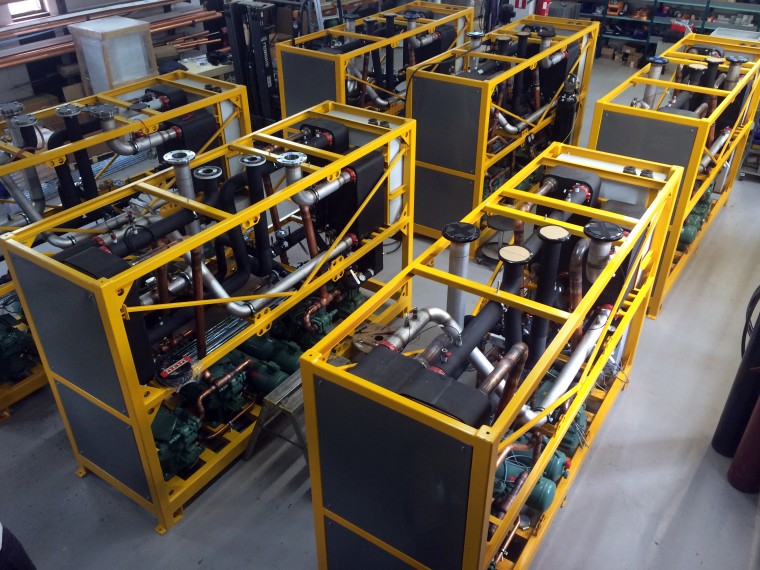 Sindelfingen/Hollola, 30.09.2015. For the fifth time, the European Heat Pump Association (EHPA) has awarded the internationally coveted prize of Heat Pump City of the Year. In 2015, BITZER’s customer Calefa Oy won the award for a project in Mäntsälä, Finland.

The aim of the project is to efficiently exploit the waste heat from a computing centre for district heating and to protect the environment. Heat exchangers first use the hot air extracted from the computing centre to heat water. In the next step, heat pumps in a district heating facility then raise the temperature of the water from 40 to 85°C. In this way, 75% of the energy originally used can be reused. This is not just very efficient, it also protects the environment. In the first phase, the CO2 emissions will be reduced by 4,000 metric tons per year and, when the project has been completed, this will be up to 11,000 metric tons of CO2 every year. Calefa’s role in this is to enable the entire technical conversion of waste heat into useful heat.

One special feature is that this is the first time when such a large amount of waste heat from a computing centre can be directly exploited for district heating. To increase the water temperature to 85°C, particularly powerful and efficient heat pumps are required. This process is supported by 24 six-cylinder ECOLINE compressors from BITZER at the heart of the heat pump system, which can each offer flow rates of up to 150 m3/h (at 50 Hz).

Confidence due to past performance

Currently, with a total capacity of four megawatts, the heat pumps supply about 1,500 homes with energy. Subsequently, this will rise to about 4,000 homes. Today, this system already complies with the environmental targets of 40% lower CO2 emissions specified by the EU for 2030. “We chose compressors from BITZER because they have stood for high quality, reliability and good performance for decades,” said Vesa Tamminen, CEO of Calefa. “That builds confidence where the long service life of the compressors is absolutely vital for us. We also know from experience that we can work together well with BITZER and can rely on their service. Our team have been successfully using BITZER compressors since 2007.”

The tight schedule was a real challenge. Work began in June 2014 and the system to recover the waste heat had to be completely installed by December. This worked out due to the excellent cooperation between the operator of the computing centre (Yandex Finland), the district heating company (Mäntsälä Sähkö Oy) and the contractor (Calefa Oy).

Work has progressed well and the entire system will go into operation in October of this year. The heat recovery unit in the computing centre is already operational and can be connected to the heat pump system. The installation of the heat pumps started as soon as the building was finished in the middle of June. Early in June the work on the necessary pipework also begun.

“We would like to offer hearty congratulations to all of Calefa’s staff on their great performance and their well-deserved award,” said Ralf Gasper, BITZER Director Sales Northern Europe and Baltic States. “We are very happy about the confidence placed by Calefa in BITZER and that our ECOLINE compressors could contribute to the success of the project.”

Sindelfingen/Hollola, 30.09.2015. For the fifth time, the European Heat Pump Association (EHPA) has awarded the internationally coveted prize of Heat Pump City of the Year. In 2015, BITZER’s customer Calefa Oy won the award for a project in Mäntsälä, Finland.