BITZER Highlights at the AHR Expo in Chicago 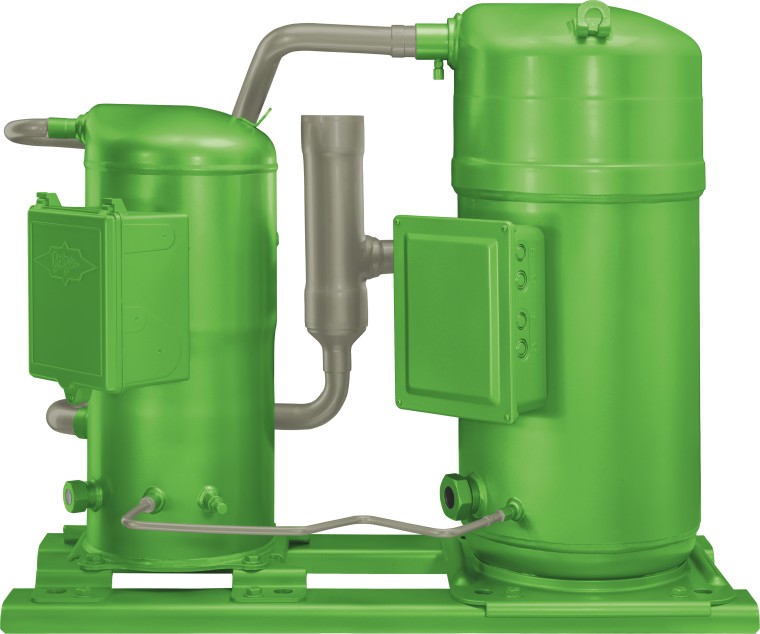 BITZER’s highlights at AHR Expo 2015 include the ORBIT 6 and 8 scroll compressors, with their high isentropic efficiency and their excellent energy efficiency. The five models in the ORBIT 6 series offer a delivery rate of between 20 and 38 m3/h (50 Hz), and really impress with their wide range of applications as well as with their low noise levels. With a cooling capacity of between 27 and 51 kW at 50 Hz, they are especially suitable for air conditioning systems and heat pumps. Just like the ORBIT 6 scroll compressors, the ORBIT 8 series has been designed for the R410A refrigerant. The six ORBIT 8 compressors have a delivery rate of between 29 and 77 m3/h (50 Hz), achieve high efficiency rates and their operating noise levels are up to 3 dB(A) lower than comparable compressors.

Can Be Flexibly Combined
Thanks to BITZER Advanced Header Technology, it is now possible to operate differing scroll compressors in parallel – without using any active oil management. This enables BITZER to offer up to 20 different combinations, with different performance, using ORBIT scroll compressors. For example, users can thus combine ORBIT 6 and 8 compressors in a single system.

A New Drive
The CSVW2 compact screw compressors are an innovation with their integrated frequency inverters. BITZER has developed the compressors for use in water cooled chillers for systems with low saturation discharge temperatures and which are equipped with new permanent magnet motors. These motors are very efficient and, in particular, are more efficient than conventional motor technologies at lower speeds and loading ranges. Thanks to their innovative drive technology, the CSVW2 compact screw compressors have a high energy efficiency rating (EER) and a good ESEER value.

The Right Screw for Every Application
BITZER is also showing its CSH series at the AHR Expo. Thanks to their optimized oil management, the semi-hermetic compact screw compressors are especially efficient when partially loaded and are very well suited to applications with higher saturation discharge temperatures. They have been designed for use in air conditioning systems, heat pumps and in individual, short circuits. With its OS series, BITZER is also presenting trade fair visitors with an open screw compressor, which was designed for the natural and carbon-neutral refrigerant ammonia (R717). This series’ special characteristics include its high system performance, its optimal power adjustment and its efficient use of energy when fully or partially loaded as well as its economizer mode.

Successful around the World: ECOLINE Reciprocating Compressor
The semi-hermetic ECOLINE reciprocating compressors are another highlight which BITZER successfully produces and distributes worldwide. The company has improved the cooling coefficient of performance (COP) of the entire series by up to 12 percent and has designed them to be flexible for the refrigerants R134a, R404A, R407A, R407C, R407F, R507A, R290 and R1270. With the new CRII capacity control, the ECOLINE reciprocating compressor’s range of control can be flexibly set between 10 and 100 percent. This lowers operating costs while protecting the environment. In the VARISPEED version, thanks to the frequency inverter being cooled by the suction gas, the ECOLINE reciprocating compressors have very good efficiency values. The smooth speed control minimizes the frequency of switching, thus lowering the energy costs. The suction gas cooling also ensures that the electrical parts operate at their optimum temperature.

High-Pressure Innovation: CO₂ Compressor
BITZER is also showing its semi-hermetic CO₂ reciprocating compressor from the OCTAGON series for sub-critical and trans-critical cycle applications. The delivery volumes of the sub-critical cycle OCTAGON series is between 1.33 m3/h and 46.9 m3/h, and for the trans-critical cycle series, it is between 3.3 m3/h and 37.9 m3/h. BITZER has more than 15 years of experience in the manufacture of CO₂ compressors and is one the established providers of environmentally friendly technology in the USA.