Next generation of compressors for CO₂ applications 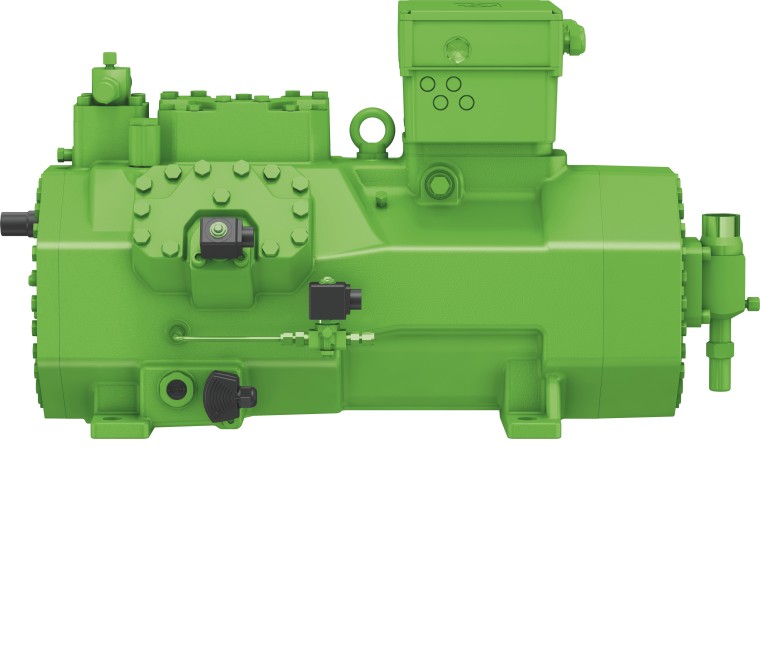 With its new ECOLINE+ range, BITZER offers a comprehensive solution for exceptional eco-efficiency

With the new six-cylinder ECOLINE+ reciprocating compressors for transcritical CO₂ applications, BITZER is setting a new benchmark in the use of CO₂ as a future-compliant refrigerant at Chillventa 2016. The BITZER ECOLINE+ series boasts three key developments: a new motor technology has been developed for series production to achieve new levels of energy efficiency. Along with the mechanical capacity control, which is also new for transcritical CO₂ applications, system efficiency has increased considerably in full and part-load operation. The new operating concept with the IQ modules was developed to take full advantage of the potential of the new technologies in terms of energy efficiency and straightforward integration into refrigeration systems, whilst ensuring simple service. These are also used in conjunction with the ECOLINE+ compressors.

‘We would like to make efficient CO₂ technology simpler and easier to understand again, and thus significantly expand the range of applications with the forward-looking refrigerant. The ability to provide refrigeration solutions that are reliable over the long term will require expanding access to CO₂ technology’, explains Rainer Große-Kracht, Chief Technology Officer of BITZER.

Specifically, further development begins with a line-start permanent-magnet motor (LSPM), which can be operated directly in networks with 50 or 60 Hertz. Incorporating permanent magnets has made it possible to significantly increase motor efficiency in full and part-load operation. This technology has been undergoing testing at BITZER and in selected systems out in the field for more than five years. With Chillventa, the LSPMs will be incorporated into the series production set for CO₂ applications. These motors can be operated both directly in the network and in the familiar speed range with frequency inverters.

The intelligent operating concept of the CM-RC-01 IQ module, which comes as standard, also ensures optimal efficiency for the oil supply, the oil heater and the new CRII capacity control, which is specially developed for CO₂ applications. The interplay between CRII and CM-RC-01 allows the capacity to be adjusted virtually infinitely between 10 and 100 per cent. The CM-RC-01 IQ module makes it very easy and inexpensive to integrate the ECOLINE+ reciprocating compressor into a whole host of system configurations. The IQ module not only improves protective measures and options for monitoring compressors, but also expands their range of applications and thus offers users greater flexibility. This in turn makes it easier, for instance, to compensate for differences between summer and winter operation. The new capacity control has increased overall efficiency, as the CRII enables a more stable and higher suction pressure.

Thanks to the intuitive BITZER Electronics Service Tool (BEST) software as well as the monitoring sensors and actuators, which are prewired and preconfigured in the BITZER factory, the compressors are also very easy to configure and service.

Prepared for the future

‘Our issues of focus at Chillventa will be environmentally friendly refrigerants, energy efficiency and user-friendliness – and these coincide perfectly with the strengths of ECOLINE+,’ says Große-Kracht. ‘CO₂ is one of the refrigerants of the future – we at BITZER believe that wholeheartedly. That’s because this refrigerant boasts a global warming potential (GWP) of 1, making it virtually climate-neutral.’ As a long-standing company, BITZER has extensive experience with innovative refrigeration technology, and has been promoting innovations in the industry for 80 years. In fact, BITZER has also been developing and manufacturing refrigeration compressors for subcritical and transcritical CO₂ applications for more than 20 years. ‘The ECOLINE+ increases system efficiency and reduces the complexity of modern CO₂ systems. At the same time, users gain long-term planning security in terms of legal requirements such as the F-gas Regulation and Ecodesign Directive,’ emphasises Große-Kracht at BITZER. ‘Thanks to the ECOLINE+, the refrigeration and air conditioning industry has taken a major step in the right direction in the area of CO₂ applications. In short, the ECOLINE+ represents maximum energy efficiency, flexibility, simplicity and convenient operation.’