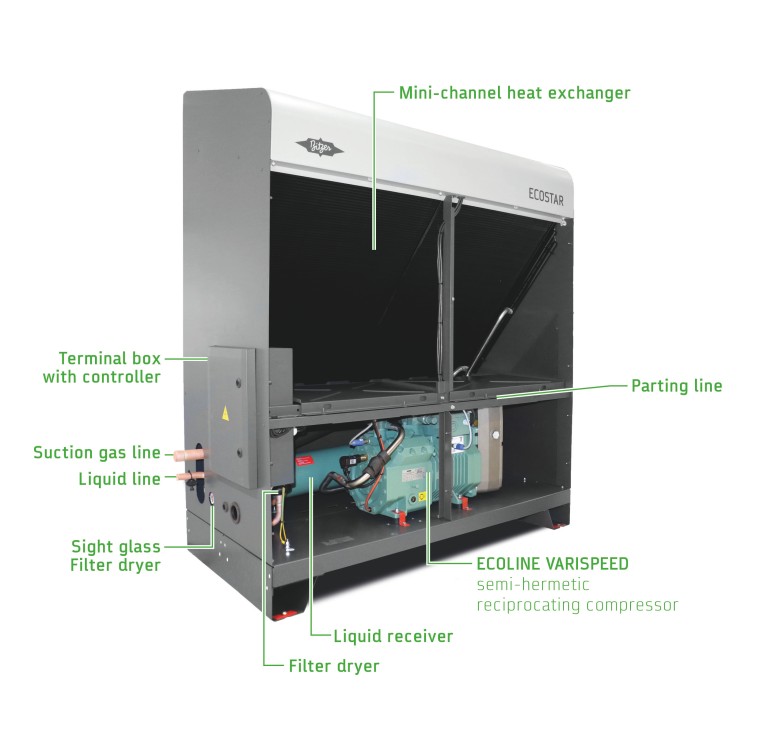 BITZER is extending the well-known ECOSTAR series even further: there are three model versions of the LHV5E and eight instead of the previous six of the LHV7E. Both condensing units have an improved mini-channel condenser, which means they require less refrigerant charge while at the same time being more efficient than the current ECOSTAR LHV6 models.

The new ECOSTAR condensing units also have EC fans that are particularly energy efficient with the latest generation of active PFC monitoring. Users can infinitely adjust their capacity and that of the internal ECOLINE VARISPEED compressor using a speed control that enables energy-optimized operation with low switch cycles. The new condensing units also boast reliable mileage and low maintenance. Devices can be quickly installed on-site thanks to the control electronics already being wired in the factory, making them immediately ready to operate.

The ECOSTAR internal control automatically adjusts the compressor speed as well as the fan control to the actual cooling load – that is, the ambient temperature – making the total system extremely effective. The user can also adjust the characteristics for unusual applications via Bluetooth with the BITZER Electronics Service Tool (BEST).

Depending on the model, the condensing units are suitable for use with the refrigerants R134a, R404A, R507A, R407A, R407C and R407F, which means BITZER enables a wide application range. Additional low-GWP refrigerants – for example R448A, R449A, R450A and R513A – are already stored in the firmware and are available upon request for the time being.

The robust and corrosion-resistant housing is designed for use outdoors, but its compact size means devices can also fit in smaller engine rooms. The running noise is extremely low thanks to the internal sound absorber and the sound-optimized airflow, so the condensing units can also be used in locations sensitive to sound – for example, within a hotel complex.

Users can control and monitor the new ECOSTAR condensing units remotely via an Ethernet LAN connection for networks or via the Internet and a Modbus RTU. In addition, BITZER has added a menu for the LHV5E and LHV7E to the latest version of its free BEST software so that control is also possible using this method. Bluetooth 4.0 also enables the ECOSTAR unit to be operated using the password-protected controller from a distance of 30 m when within eyeshot. Manual control and monitoring is also possible via the internal LCD display in the controller housing.

A new function in the latest firmware also enables up to four ECOSTAR condensing units to be connected via the Modbus. They then form an ECOSTAR control network and, in optimized interaction, control the temperature of a cold store without having to be connected in the refrigerant circuit.

The ECOSTAR condensing units’ optimized software provides a number of improvements: thanks to the revised emergency mode, the compressors and fans continue working at the same speed even if the sensors fail. If the sensor failure only occurs sporadically – for example, due to a loose contact – the emergency mode is automatically overridden. When the sensors function normally again, the unit continues working independently.

Also, frequency ranges can be skipped without the need for a BEST converter thanks to the improved avoidance of resonance. The update now enables the external access to be configured: an optional alarm signal can be set that sounds whenever the external access is disabled.