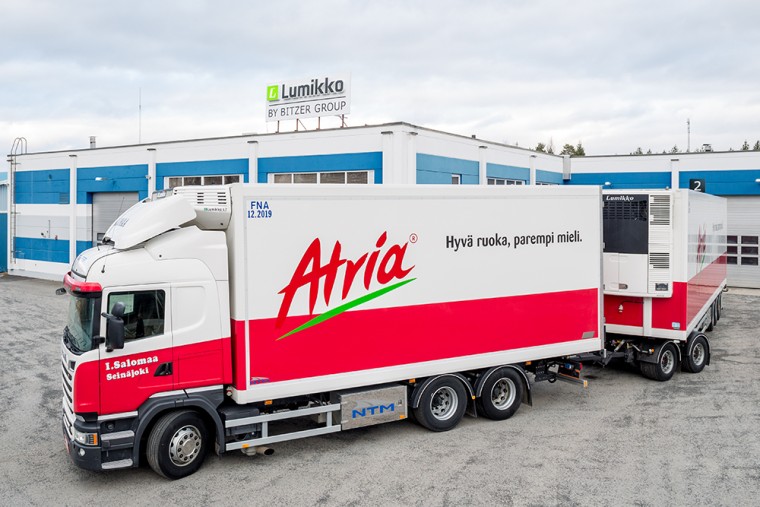 The new Lumikko system weighs in at just 400 kilograms and is therefore much lighter than any comparable systems. This is a key benefit, particularly in mobile applications, as it increases payload and reduces fuel consumption. The integrated evaporator no longer takes up additional cargo space and therefore saves space, a first in this performance class. The L4 is designed for use in trucks exceeding 5.5 metric tons and is ideal, for example, for transporting temperature-sensitive products such as food.

Two types of drive: diesel engine and electric motor
The hybrid compressor of the L4 can be used with two types of drive: a diesel engine as an external source of drive and an integrated electric motor. In diesel operation, the hybrid compressor’s electric motor acts as a generator, so there is no need for additional generators to power other electrical components in the system such as fan, heating and control. In low temperature operation, the L4 achieves a refrigerating capacity of around 4 kW – both in diesel engine and electric motor operation. In normal temperature operation, both drive technologies are even capable of around 8 kW. The L4 is also flexible when it comes to refrigerants – and is compatible with R404A, R452A and others. BITZER manufactures the hybrid compressor in the global competence center for reciprocating compressors, while Lumikko produces the L4 in Finland. Lumikko introduced the L4 along with the new hybrid compressor for the first time at the end of June 2015 at the Logistiikka-Kuljetus 2015 trade fair in Helsinki. In Germany, the chiller and compressor will be on display at the CareUnit stand (FG 10) at the NUFAM trade fair at Karlsruhe Trade Fair Center between September 24 and 27.

Hybrid – technology of the future
Intensive monitoring ensures that the reciprocating compressor fulfills high standards in terms of quality, reliability and performance at all times, which BITZER has come to represent around the world. “The entire power train is exceptionally compact and powerful,” says Tobias Fuhrer, Market Sector Manager Truck & Trailer at BITZER. “The compact, lightweight L4 is a real power pack that’s setting benchmarks in its class. It represents an important step into the future – and the hybrid technology plays a key role for BITZER.” Field-testing on the new hybrid compressor system will begin in October 2015, with series production planned for the second quarter of 2016. BITZER will continue to promote hybrid technology: within one to two years, the driver of innovation in the refrigeration and air conditioning industry will apply this technology to the entire Lumikko product range. The color display is also new, setting itself apart from the monochrome models of competitors. The display currently supports the languages German, English, Swedish, Finnish and Hebrew, with additional languages to follow.

Comprehensive service
The chiller and compressor also demonstrate their strengths when it comes to maintenance: both are simple to install and service, as all the parts are very easy to access. The longer intervals reduce costs and users can rely on the support of a service specialist, as Lumikko and CareUnit concluded an exclusive sales and service contract in 2014. Based in Bochum, the company sells and services chillers in Germany and Austria, and offers an extensive service network with its 62 service stations and more than 300 service vehicles.

A truck with a fully functional chiller can be found at the CareUnit site. Journalists can go there to find out more about the technology of the Lumikko systems, ask questions and take photos. Those interested can even borrow the vehicle to test it out. For an appointment, please contact Patrick Koops, BITZER Public Relations. patrick.koops@bitzer.de, tel.: +49-7031-932-4327